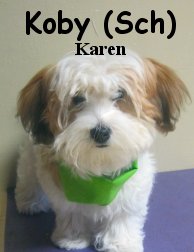 Meet Koby-- a sweet little 18-week-old Havanese that started attending the Fort this morning. He was very self confident up with the other little guys (he only weighs four-and-a-half pounds!), and while he didn't play much today, we expect to see him getting more into the groove as he continues to attend. For today, he was just checking it out and taking it in.

In this clip from upstairs, Koby can be seen watching Marlee and Cortez have a romp. Those two play pretty hard, so I'm not surprised that the new pup was a little trepidatious about joining in with them. Once they slowed down toward the end, Koby went over to give them a few good sniffs.
He was also a bit more interested in Jaya with the camera--sometimes it's hard to get clips, when just being in the play area can be so distracting!

We look forward to seeing you back with us, Koby!