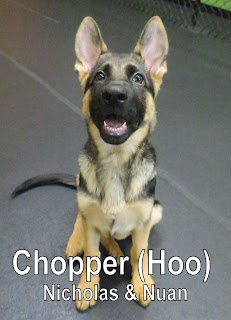 Yesterday, we had the pleasure of welcoming Chopper to the Fort. He is a four-month-old, twenty-five-pound, German Shepherd. He spent the morning hanging out in our Medium Dog Program. Chopper had a great first day and made lots of new friends. He is welcome back anytime. We look forward to seeing him again soon!

Have a great weekend,
- Gary
Posted by Fort Fido at 1:42 PM No comments:

Out of all the pets that people could own, dogs are definitely some of the most entertaining... I decided to dedicate today's blog to finding silly videos of dogs and beds.

"When you're in denial that you have to wake up"... Watch Below!

Sleep tight everyone,
~Shaunte'
Posted by Fort Fido at 7:56 PM No comments:

Dalmatians are such good-looking dogs; I wish we had more of these guys attending The Fort every now and then... They seem to be more rare, and not as common of a breed, as they used to be.

It's hard to break down the origins of this breed because they're unknown; it's unclear when Dalmatians first came about. The only real information we have, is that they traveled with Gypsies from Romania. This magnificent breed earned its name while staying in Dalmatia: which is a Province, on the Eastern Shore of the Adriatic Sea.

On average, this breed stands between nineteen, and twenty four inches tall, and weighs anywhere from forty eight, to fifty five pounds. Males are typically larger.

These guys are natural born runners. They may look cute, but they're a very high-energy breed that needs lots of exercise. Make sure you're up for all the playing and commitment it's going to take to wore these guys out- before you purchase one. Other than being high energy, Dalmatians are often known as the "Comedian"  of the dog world; they'll do anything to put a smile on your face. Because they'll do almost anything to please you, Dalmatians make great "Watch Dogs", being as alert and aware of their surroundings, as they are.

The distinctive coat on this magnificent breed is almost satisfying to touch- as it feels like velvet. Typically you see Dalmatians with a white undercoat, and black spots that range anywhere from a quarter, to a silver dollar in size.

Did you know Dalmatians can have brown spots as well?


Check out this video to see what I was talking about when I mentioned how comical this breed is. I now have a permanent smile on my face, after watching it!

I hope you learned a thing or two about this glorious breed... Try to stay warm tonight, I'd say it's almost fireplace season!

~Shaunte
Posted by Fort Fido at 1:26 PM No comments: 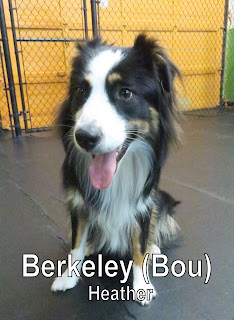 This morning we welcomed Berkeley to the Fort. He is an eleven-month-old, Australian Shepherd. Berkeley joined our Medium Dog Program where he had a great time playing with the other dogs. He passed his assessment with flying colors and is welcome back any time.

Louis (the black dog in this video) really took a shine to Berkeley today. Louis pretty much rules the school when he visits the Fort, and if he says you are alright then boy are you ALRIGHT! 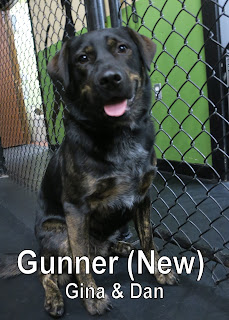 Yesterday, we had the pleasure of meeting Gunner. He is a two-year-old, seventy-pound, Anatolian Shepherd x Rottweiler x Lab mix. Gunner spent the morning hanging out with the dogs in our Large Dog Program. He did a great job and we look forward to seeing him again soon! 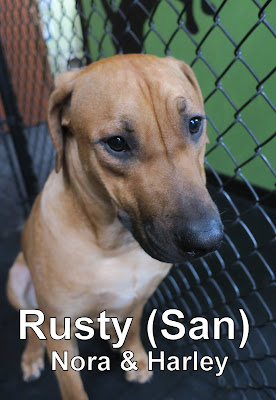 Rusty was our assessment from yesterday. He's four months old, weighs fifty five pounds, and is a magnificent Rhodesian Ridgeback!
Rusty was a little shy at first, but we noticed he started mingling with his new friends the longer he was here. Did you know that this breed was developed in Africa? They were originally meant for being the perfect hunter- and guardian of their homes. They liked to chase off wild Lions, Boars, and Bears.

Although Rusty was new to us, his owners weren't! We met Rusty's older brother Zeus, back in 2015!

Rusty is more than welcome to come back to The Fort and enjoy some more fun in our Large Dog Program, with his brother! 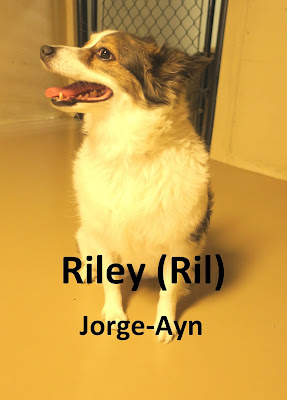 Riley was our assessment from Friday. She's a mini Australian Shepherd that weighs nineteen pounds, and is six in a half years old. This gorgeous girl showed great "Dogspeak" when she met all her new friends. She did a lot of mingling, sniffing, and exploring of our Small Dog Program. It was nice getting to know her as the morning progressed. 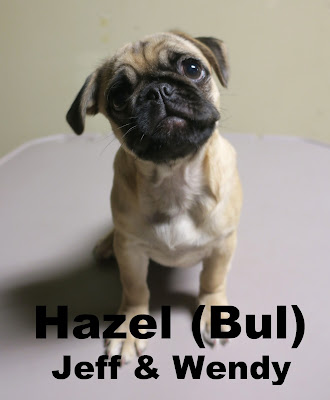 Hazel walked in here like she owned the place, this morning! She had some pep in her step, as we wondered up to the Puppy Program. This sweetheart is only three months old, and weighs almost eight pounds. Can you guess what breed she is? You're probably guessing Pug, am I correct? Well, you're halfway there; Hazel is a Puginese! Which is: 3/4 Pug and 1/4 Pekingese. She had a wonderful time meeting and greeting all the dogs that attended our Small Dog/Puppy Program today. She even made a friend! Check her out in action below...

We are looking forward to getting to know this two as they start coming to The Fort more often! 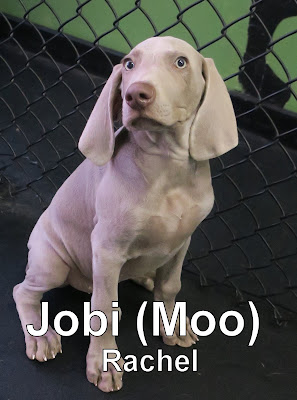 Jobi was our handsome assessment yesterday morning... This cute little guy is only eleven weeks old, weighs almost nineteen pounds, and is a Weimaraner. Jobi loved his first day with us; he made several friends, and loved exploring in our Medium Dog Program. We even got a video of him playing, check it out below. 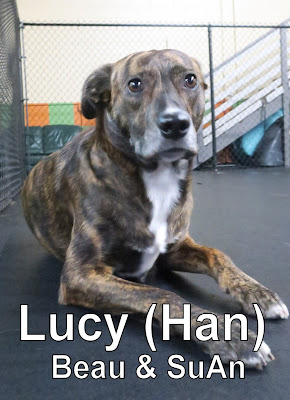 Lucy was our assessment today. She's a Lab mix that weighs fifty pounds, and is one in a half years old. This sweet girl did a little bit of exploring and sniffing when she got here. We didn't see too much playing, but she was mingling with everyone, well. We think that Lucy is going to blossom, and make friends the more times she comes here.

Both dogs can come back whenever they want,
Have a good day!
~Shaunte'

It's been quite a while since we've shared some funny dog videos on our blog; the time has come...

In the video that you're about to watch, you will see an assortment of silly dog shenanigans, such as: A dog trying to play with a Whale, catching a Balloon in slow motion, stealing food from the fridge when nobody is looking, a Chihuahua that thinks he's more tough than a Great Dane, and many other things.

You're probably more likely to see a dog in water- over a cat... Although, some dogs don't like water play and getting clean! Check out this funny video, to see what I mean.

Alright, that's all the humour I have to share for today! I hope you all have a marvelous week,

Yesterday, Frank the little Cavapoo puppy met Riky Tiky for the first time. The two of them became best friends and were inseparable for the rest of the day. Here are a couple clips of them playing in our Small Dog Program.

Have a great weekend,
- Gary
Posted by Fort Fido at 1:45 PM No comments: 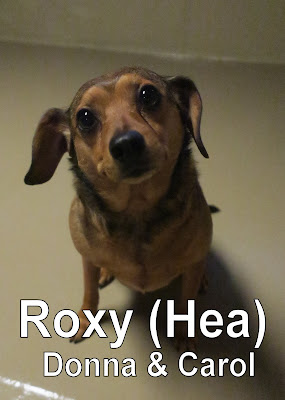 Roxy was one of our assessments from yesterday morning. She's a four year old, twenty pound Dachshund mix! This high energy gal loved to frolic all around our Small Dog Program. She jumped from our bunch and picnic table numerous times; we even started introducing her to some balls. She has a lot of energy, but also has a very calm demeanor at the same time. 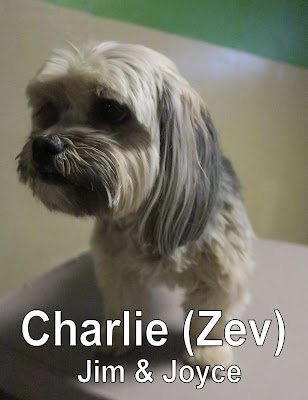 This is Charlie, he was our other assessment from yesterday. He weighs sixteen pounds, is six years old, and is a Lhasa Apso/ Yorkshire Terrier. This little guy was very happy-go-lucky, lively, and wagged his tail like there was no tomorrow. He loves people, that was definitely apparent- but he's content hanging out with his new dog friends as well. 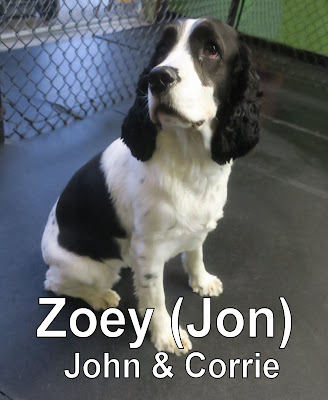 Zoey was our assessment from today. She's a four year old, thirty eight pound English Springer Spaniel that has very expressive eyebrows. She joined our Medium Dog Program with grace and ease... She enjoyed being with the other dogs, and even got to hang out with another dog that looks exactly like her, Hank! Check out their selfie together 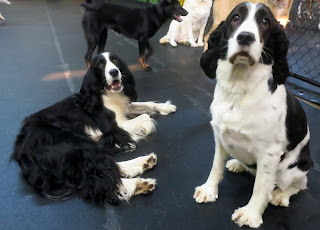 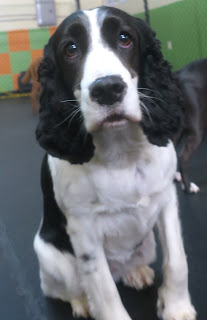 See what I mean with the eyebrows? ;)


We are looking forward to seeing Roxie, Charlie, and Zoey soon.

Happy Wednesday, Shaunte'
Posted by Fort Fido at 11:13 AM No comments: 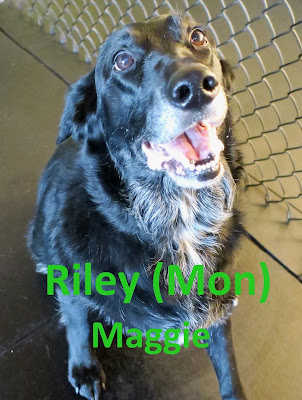 Riley is a one hundred and eight pound lab mix, that's eight years old! He joined our Large Dog Program with a little bit of curiosity, and pep in his step!

He may be an older dog- but that certainly doesn't slow him down. We had no worry that this guy would pass his assessment with flying colors, once we started picking up on his "Dog Speak"
Notice how he kept trying to Muzzle Punch Diego? The reason he was doing that is because he was trying to get his attention. He wanted to play and burn some energy! Near the end of the video, you'll also see Riley point his Behind towards Diego. In the Dog World, sniffing butts is the proper and expected way to greet one another.

We not only got his "Dog Speak" on video, but we also got him playing with some of his new friends. 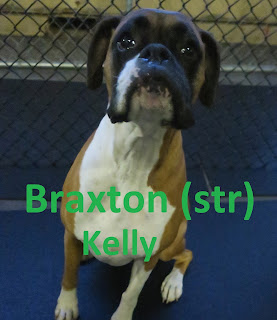 We welcomed another Boxer to The Fort this morning as well, Braxton! This guy isn't too far behind Riley- he's only two years younger than him at six years old, and weighs 70 pounds. 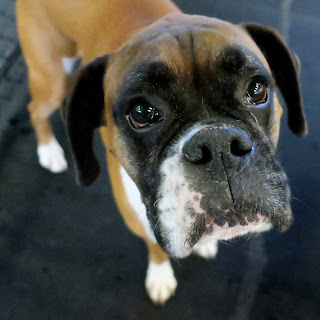 He had an overall good day with us. We enjoyed watching him check out his new play area, as he was trying to discover what this place is all about. He mingled, sniffed some butts, and wagged his tail! With time, we can certainly see Braxton making lots of friends here. He seemed to get more and more comfortable with us, by the minute!

Both dogs can come back whenever they please.
Take care,
Shaunte' 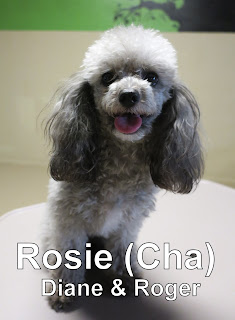 Rosie came into the Fort bright and early this morning for her assessment. She is a two-year-old, six-pound, Toy Poodle. Rosie joined our Small Dog Program where she enjoyed mingling with the other dogs. She had a great first day and is welcome back anytime. We look forward to seeing her again soon!

Have a great weekend,
- Gary
Posted by Fort Fido at 1:26 PM No comments: