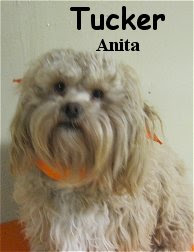 Meet Tucker, what a stud-muffin lol! He is an eleven month old, sixteen pound, Poodle-Yorkie-Shih Tzu Mix that assessed this morning. Tucker thought he was headed to the gym this morning to see his brother Dwayne, who recently started attending. However, when the car turned into the Fort Fido parking lot, tucker knew something new was up. He ventured into our Little Roll and keenly observed his new surroundings. Tucker was an absolute delight, although not as outgoing with the pack as his brother Dwayne. His owner is hoping to expand his horizons by bringing him to The Fort. We believe that in time, Tucker will begin to bust out and truly benefit from Dog Daycare. It will be awesome when Tucker meets his brother Dwayne upstairs this coming Thursday! That outta definitely get him even more interested in play.

Have a great weekend,

-Grant
P.S. Theses brothers, Tucker & Dwayne... Don't they have a cool look? Akin to Tom Selleck no? Hahaha! Thanks to Dwayne's mom for pointing that out to me.