From weird and wacky to touching and heartfelt--it's the Dog News Roundup!

Today's stories span a wide range of animal related incidents. We'll start off with the weird, since I really love a good laugh. 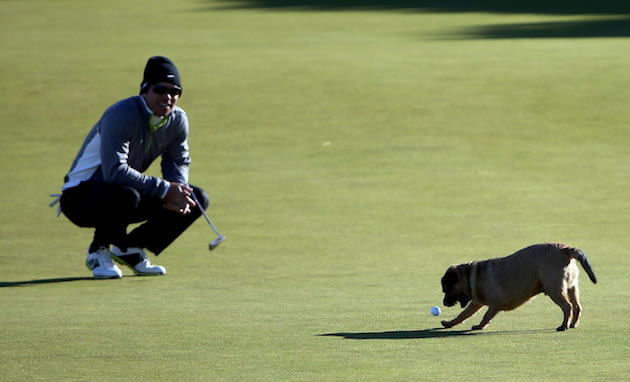 Paul Casey found that his golf game really had gone to the dogs, when an adorable little terrier mix (it appears, anyway) made off with his ball as he was eyeing a putt! Just goes to show that while playing gold, expect the unexpected.

A Utah man believed that he was being phoned by burglars, only to discover that it was his own pooch that placed the call!

To raise awareness about the election for the House of Commons in Canada, a man has filed paperwork for his pooch Genny to run for Parliament. She has tried her hand at paw-litics in the past, running for mayor of Clarington, Ontario.

In a bid to raise awareness of the extreme over-population of shelters in Miami, a man decided to live in one of the kennel runs for a weekend. The goal is to get all the pups in the shelter adopted during his "incarceration."

Moving on to the amazing--

A microchip has reunited a pup with her family after a five year separation. Every time I read one of these stories, I want to remind everyone I know with a pet that something that costs only about $15 can really be the make-or-break of whether you get to see your beloved pet again. Without collar or tags, pups can be picked up and re-homed, or much much worse.

A six-month-old pup fell four stories--without breaking any bones. He was quite shaken up, and walking is difficult (not to mention the concussion that has impacted his eyesight), but these problems are only temporary. It's amazing to me that any animal could survive that kind of a fall!

When you are laid up in the hospital, it's always nice to have unexpected people drop by to check in, and express their concern and well-wishes. One New York man got such a visit-- from his dog, who had escaped the house and yard to travel over two miles through confusing neighborhood streets and across freeways to come and find him at the hospital. Now that is love!

In the category of  "super cute," seven Cheetah cubs were born at a zoo in the UK. Make sure you click this link and see the video of these amazing animals.

Have a great weekend, and we'll be seeing you back on Monday!


P.S.-- If you know somebody who is looking for a feline addition to the household, King County Regional Animal Services is waiving the adoption fee for cats six months and older through October 31st. These cats are all spayed/neutered, up-to-date on vaccinations, and microchipped.
Posted by Fort Fido at 2:31 PM