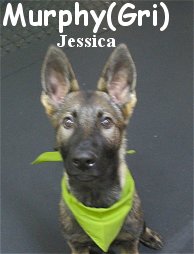 Young pup Murphy came in for his assessment this morning. He is a four month old, twenty-five pound, sable colored, German Shepherd. Murphy is still a little fella, so we put him in the Medium Roll. He was very interested in the other dogs but, like a typical puppy, did not properly greet them... After a few corrections from some of the older dogs, Murphy really began to get the hang of things. Once a few younger canines entered the roll, he was in "hog heaven" lol. He made best friends with Tilly, romping about hard with her, among others. Murphy did a fantastic job today. He is highly intelligent and should become an outstanding member of The Fort's Pack. Respecting "Mother Maggie" was also a wise choice of his today. ;)

German Shepherds are beautiful creatures, however, they are "a lot of dog" requiring strong leadership! We here at Fort Fido commend Murphy's owners for educating themselves and doing right by him. Way to go!