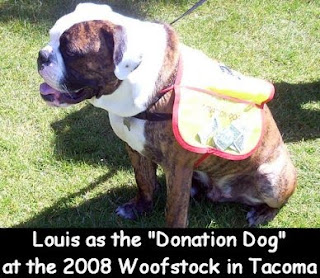 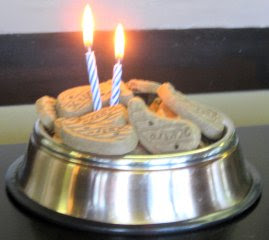 Louis the English Bulldog has been coming to Fort Fido since February of '08 . He was about four months old when he started and tomorrow is his second birthday. Louis is a great dog, he can go from 0-60 in no time at all! Sometimes he is laid back, chilling out or neck fighting (a type of play where both dogs are lying down). Other times he's hitting the throttle, bounding around at full speed (he can really catch some air for a bulldog). Louie is very attractive and obedient. His owner's have done a fine job with him, they really put in the work as far as training is concerned. He was acquired from a breeder in Napavine and word on the street is that his lineage can be traced back to a bulldog that Arnold Schwarzenegger had, cool! Rock on Louis, happy birthday!

Enjoy the weekend everybody,

-Grant
P.S. Louis was also kind enough to bring in doggy treats to share with his Fort Fido pals today.
Thank you! In other news, this article is gloomy, this one is much better. 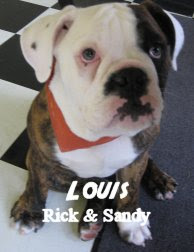