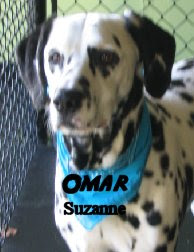 This is Omar. He started attending Fort Fido way back in 2006, and- though you may not believe it- he is probably ten or more years old! His exact age isn't known, since his current owner rescued him after he was abandoned in a house. Despite his rough start in life, Omar is still going strong. Though he is more likely to spend time just enjoying the company of the pack than tearing it up, sometimes he gets in the mood and can rip around with the best of them. Most of the time Omar has a sweet little gait--when he walks around the play area, he reminds me of a trotting horse.

He looks like he would be at home in a fire department, and is also incredibly soft! Many people (like me!) assume that most short-haired fur is of about the same texture, but some breeds tend to be much softer. Dalmatians and Greyhounds are two that I know of (and have had the pleasure of petting).