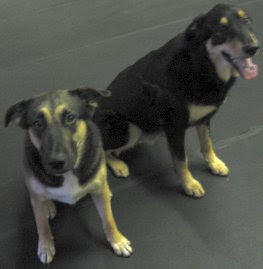 Ruger has been coming to Fort Fido since we opened! He started in our second week back in September of 2006. A rescue dog from Lil’ Waif Puppy Rescue in Bothell, Ruger is a very handsome Lab / German Shepard mix. A few adjectives for Ruger are loving, loyal and confident. He is a great daycare dog that takes no guff from youngins in the pack.

Six months after Ruger started attending Fort Fido, his owners were bitten once again by the puppy bug. They went back up to Lil’ Waif and picked up Dakota. Dakota is described by her owners as a German Shepard, Boarder Collie Mutt. Fido staff describe her as a high-energy, spunky, and strong bitch (pun intended)! She absolutely loves Ruger, the pair remind us of a twin brother and sister relationship.

Ruger & Dakota are just two of the many great dogs who attend daycare at the fort. We plan to introduce many more of Fido’s friends as this blog develops. Take care,

-Grant
P.S. If you are looking for something to do tomorrow in the South Sound this may or may not be up your alley. :)