Guinea of the morning 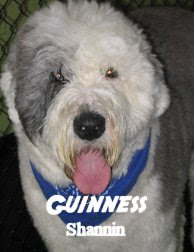 Guinness the Old English Sheepdog joined Fort Fido in September of 2006. He is 4 ½ years old and close to 100 pounds. "Guinea" as we like to call him, is a lot of dog. He runs fast, poops big, barks loud and has a blast here at the fort. His favorite game is herding (naturally) and his zest for life is immeasurable. Although Guinea can be a lot of work at times, not falling in love with him is impossible. Guinness is a beautiful specimen!

Another interesting fact is that Guinea's owner acquired him from Merrimac Farm in Redmond. The well known breeding program is ran by Merrilee Rush. If the name sounds familiar this might ring a bell...

-Grant
P.S. Basic obedience and leadership class with Garrett Stevens starts tomorrow night at the fort. It's going to be extremely informative and it's not to late to sign up!
Posted by Fort Fido at 11:09 AM