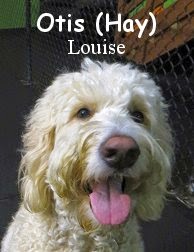 Yesterday, we Assessed Otis (Hay). He is a happy-go-lucky, three year old, seventy-five pound, Goldendoodle. One gregarious dog, Otis, entered the Big Roll Play Area with ease and excitement. He was quite happy to meet and greet with every canine that entered after him. Otis held his joyful disposition throughout his whole visit. It was nice to see a new canine so calm and content on a first day... And although he didn't get into too much rowdy-play, he socialized a lot, and truly enjoyed his time spent with the pack. 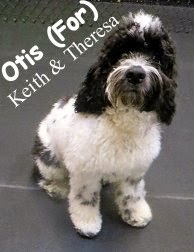 Early this morning we met our second Otis, Otis (For). He is a bubbly, seven month old, forty pound, Cockapoo. Now this Otis is also super sweet, yet he is still much a high-energy and bouncy young pup, one that is still learning manners. To get him started at Fort Fido, we led him to the Medium Roll Play Area, which proved to be a very nice fit . There, Otis explored cheerfully, and got his badge picture taken. After that, it was time to meet some pack members. Otis met first with Cooper, and it was down-right perfect. Almost exactly the same age, Otis and Cooper hit it off instantly! The two lively canines sprinted and spun about the Medium Roll, in a furry of fun play. As time passed, Otis continued to meet with the different dogs that arrived, and most importantly, continued to play tons and have fun. Otis and his owners can get a lot out of Dog Daycare!

Here, Otis (For) rips around with Cooper:


Both Otis (Hay) and Otis (For) did an outstanding job on their Assessment Days, we plan on seeing them again very soon.