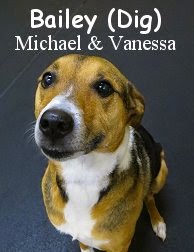 Yesterday we welcomed Bailey to The Fort. She is a happy, nine year old, fifty-five pound, Mixed Breed. As Bailey walked into the lobby, it was clear that this "wasn't her first time at the rodeo" lol. She was pretty calm and balanced, definitely a mature and happy canine. With that observation, we had Bailey spend her time in the Medium Roll Play Area. There, she met with each and every pack member joyously, as they rolled in throughout the morning. She had somewhat of a "mothering" quality, that really meshed well with The Medium Roll and it's wide array of small to medium sized, young and wile canines. Bailey exhibited great patience with the pack, and specifically, many of it's "crazy puppy" members. Bailey even played a tiny bit with a couple of different dogs, however most of the time, she just cruised around socializing actively. We're pretty sure that Bailey will be doing a lot more playing in future visits to Fort Fido, time will tell. 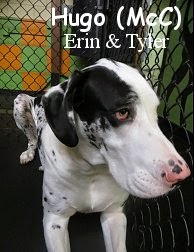 This morning was a BIG Assessment morning... Get a load of Hugo! He is a one year old, 150 pound, Great Dane. Talk about a good looking dog (unfortunately our pic doesn't do him justice), Hugo's contrasting colors and harlequin coat pattern make him a site to see. Inside of the Big Roll, he acted fairly calm as he sniffed the floor a bit, in anticipation of meeting some other dogs. After a few minutes passed, the other dogs began to show up, one after another, per usual. Right away, Hugo exhibited to them all, that he speaks quite fluent "Dog", meeting and greeting with each new pack member in the proper way, with much fluidity and canine etiquette. As the pack continued to grow, Hugo continued to socialize well with the other canines, he even began to play a good amount with Jesse and a few others. He's a real "gentle giant", and the pack took to him well.

Both Bailey and Hugo are neat canines that are welcome to hang with us here whenever they'd like. We look forward to their next visits!