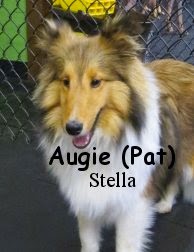 Man, it has been awesome around these parts lately... We've had quite the influx of one of my favorite dog breeds, The Shetland Sheepdog. This morning marked the fourth "Sheltie" that The Fort has assessed in the last two months. Woo hoo! It's funny, because after eight years of being in business, we've only seen three other shelties before the current four. So including my dog, Gibson, there are currently six Shetland Sheepdogs here at Fort Fido. Maybe their popularity is on the rise once again? They were definitely most popular in the 80's/early 90's, and were Japan's most popular breed for years up until recently. I'm chalking it up to celebs getting them... Thanks Miley lol!

Ok, now in all seriousness, meet our latest recruit, Augie! He is a energy-filled, seven month old, fourteen pound, Sheltie. We had Augie try out the Little Roll upstairs, just to see how it'd go, knowing that he'd most likely graduate to the Medium Roll... Sure enough, he was too much for the tykes up there. He did nothing wrong, he just needs more room, more stimulation, and more rough and tumble types of playmates. So after a couple of minutes upstairs, Augie headed to the Medium Play Area. Waiting there, was the absolutely perfect dog to meet Augie, and match his energy level, it was none other than, Georgie. The twosome sniffed each other for about ten seconds, before the sprinting and chase games ensued. Augie's owner was not joking when she said he was a "wild one". All in good fun, Augie continued to make new canine buddies and play hard throughout his stay. Although quite a live-wire, Augie, did a great job here today. With time and consistency, Augie and his owner can get quite a lot out of Dog Daycare. It will sharpen his social skills, and will most definetly take away "some" of his energy. Hopefully he's "down a notch" after today's visit, haha!

In the following clip, Augie and Georgie, meet for the first time:


Have a nice weekend,