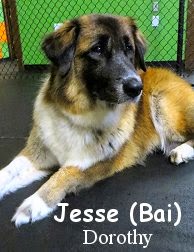 Lo and behold Jesse! This handsome looking Mixed Breed is eight years old and weighs about seventy pounds. With a large and confident demeanor, Jesse walked into The Fort's lobby quite ready for his Assessment Day. We had him give our Big Roll Play Area a go, where we assumed he'd do great, given that he has been a Dog Daycare regular for most of his life. Jesse's first "meeting" was with the extra large and fun, Theodore, and to no surprise, Jesse met with him graciously. The pack continued to grow and things continued to go well... However, as soon as Brix got into the mix, Jesse busted out with him, into some high-energy "wrestle play". The two dogs played hard together off and on for a few hours, allowing other canines to join in as well. It was pretty much non-stop socialization-action for Jesse, up until he finally laid down for a rest, after about three and a half hours lol. In the end, we assumed right, Jesse did awesome! Over time, he should prove to be a key player in our Big-Dog Pack. Rest up Jesse, because we plan on seeing you again soon.

In this clip, Jesse shows off his "tough" canine playin' skills: