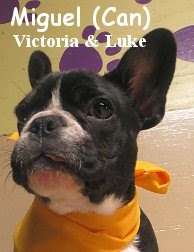 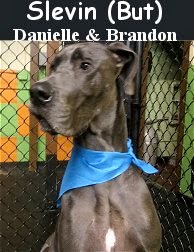 Well everyone, we've finally made it to Friday, way to go lol! It was an awesome week to "pretty much" wrap up March. We had many new canines try The Fort on for size this week, and lucky for us and them, they all passed their assessments. We end this week on a high note, with two successful new comers, Miguel and Slevin.

Miguel is an adorable, four month old, eleven pound, brindle, black and white colored, French Bulldog. She hung out with us in our Little Roll play area. Up there, Miguel was jubilant, and super eager to meet the other canines. She was constantly on the move, getting to know one pack member after another. Miguel is a fun pup that just wants to play and be happy... Knowing that, she'll continue to do great here!

Slevin is a three year old, one hundred and twenty-eight pound, "blue" and white colored, Great Dane. Slevin wasn't quite sure what to make of the Big Roll at first. As time passed and more dogs arrived, he started to really open up to the experience. He met with dogs favorably, then relaxed enough to engage in play with several of them, including, you guessed it, another Great Dane, Theodore. It was exciting to see the two massive canines interacting so well, and having a blast.

Miguel and Slevin are two great dogs, capping off our assessment-filled week. We hear that we'll be meeting up with them again real soon.

P.S. Unfortunately, we didn't capture any clips of Miguel this time around. We did however, get a glimpse of Slevin on the camera.