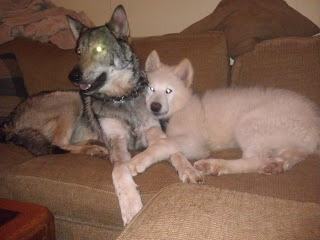 My long time, good friend, Robbie Canter, is one awesome individual. He is the type of person that puts 100% of himself (heart, soul, body, mind, etc...), into everything he does. With that being said, his values make him an exciting friend to have. Most definitely an exciting friend to watch live life. At times, you can't help but live vicariously through him lol. ;)

Robbie and I have know each other since elementary school. We meet up once a month or so and always have a good time. He is the owner and operator of RcMedia and lives in Gig Harbor, WA with his animals. My most recent visit, a couple of weeks ago, had an agenda... Rather than just catching up on what was new and laughing at old times, I had to meet The Wolves! I knew the pictures alone would make a very happenin' blog post. So here ya go... As always, click on the pictures to enlarge them.

Working with the WCC, and closely with Songdog Rescue, Robbie has built and amazing wolf den/ animal enclosure and opened his home to not one, but two, high-content Wolf Hybrids! I'm talking, more or less straight up wolves lol. 95%+ Gray Wolf or Timber Wolf, with the left out tiny percentage being a domestic Northern breed like the Husky/Malamute/etc...

Upon arrival, I must admit I was slightly hesitant on meeting them. However, being a dog professional, I knew that wasn't the correct energy to have. Once I got my bearings and entered the enclosure, I was completely at peace. The wolves were cautious at first, then curious and kind, like many of the dogs we deal with at Fort Fido. Almost shocked by this, I began to interact with Koda and Blitz more and more as the night went on. Later, we all went inside the house, where the wolves sleep in their own individual beds at night, and hung out. 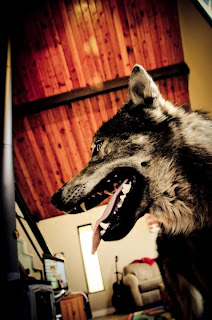 It was rather exhilarating and funny to watch the young pup, Blitz, play with the more wolf-like Koda and Robbie's old man-Pit bull, Alpha Pack Leader, Indy (who Robbie rescued off the streets years ago). Blitz was loving, spunky, and slightly annoying, to Koda and Indy. He was exactly like your average canine puppy dog. The two older pack members had to constantly play with and wrangle him, it was precious, mostly hilarious!

Koda, with the more intimidating appearance, kept coming to check me out while I sat at a table. Maybe it was because I was new to him and smelt like a thousand "wolves"? I think so haha. I got close enough with him to pet him and have some understanding of trust. It was truly amazing. The trust, was even to the point of Koda allowing me touch his beautiful, 2" canine teeth (no exaggeration). Ay caramba! But alas, looking past his immense stature, huge teeth, and yellow eyes... He was just another dog to me. Even if he dwarfed the infamous, Marco Polo, and even Brutus, in many ways.

Wolf Puppy Blitz and I didn't really get to know one another as much. We certainly weren't fearful of each other, but he wasn't sure what to make of me, and I egged him on a wee bit. It was pure comedy. When his "pops" Robbie was around, he would let me near, and or act like I was part of the pack... Yet as soon as Robbie left the room for something, Blitz would look at me funny, kinda bark, kinda play-bow, then run. Just like any young puppy that hasn't quite gotten your vibe. He wasn't sure of me, so I didn't push myself on him too much. Even though it was hard not to, due to his cute baby-dog ways lol. 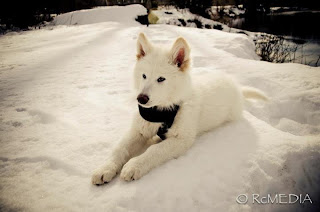 All in all, the meet and greet was quite a pleasurable experience. Awesome job, Robbie my friend, on rescuing, raising and loving these fantastic animals. I can't wait to meet up with you all again, although I gotta tell ya, I'm sticking to Shelties man! Hahaha! 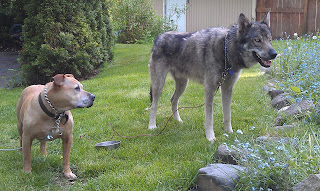