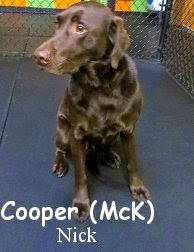 This morning Fort Fido's Team had Cooper in for his Assessment Day. He is a handsome, five year old, sixty-five pound, Chocolate Labrador Retriever. Even though he is a Dog Daycare veteran, Cooper, wasn't quite sure what we had in store for him here at The Fort. He was a bit nervous after being ushered to the Big Roll, and took a while to get settled in. Once he met some of our other canine guests, he started "feelin it" more. As time passed and the Large Dog Play Area's pack grew, Cooper seemed to really start enjoying himself, he even played a little bit. Mostly, he just went around meeting the various pack members, strolling through the roll calmly, with his "sniffer" on high lol. He was fond of Jackson, and even liked a few of the other "Chocolates" that we had in today. Cooper is most welcome to Fort Fido anytime. Good on ya boy!

In the clip that follows, you can get a glimpse of Cooper during his first meeting with Jackson.