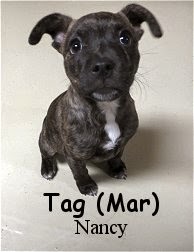 Up for his assessment this morning, was little puppy-dog, Tag. He is a fine, two month old, nine pound, American Pit Bull Terrier. He has been brought here to The Fort to learn how to be a good "dog's dog", to play, and to socialize properly. He''ll probably end up being a big boy, but for now he is itty bitty... So much so, that Tag had to stay in our Little Roll for this visit. Up there, he explored a little and did fairly well, but was quite timid around the other canines. At this point, he is more interested in people than dogs. We wanted to see him "bust out", but we had to remind ourselves that it was hit first day and that he is a very young canine. "First Days" can be overwhelming for anybody.

Tag didn't play, however we know he will once given some time and consistency here at Fort Fido. He sure seemed like he wanted to. We commend his owners for socializing him early and getting him on the right track. As everyone knows, Tag's breed is caught up in controversy at times, yet, like any canine raising endeavor, the "nurture" portion, can out way the "nature" portion. It is are belief, that if the upbringing is handled properly, any canine, of any breed, can be social, happy, and healthy.

Most importantly, Tag's owners will need to follow through with their comings and goings, and put in some more work, to ensure that Tag doesn't come down with any Separation Anxiety. When the work gets done, with all who are involved with Tag, there is no doubt that he can become a calm and well balanced canine... Just the kind of dog everybody is after. Good on ya today Tag, we'll see ya around.