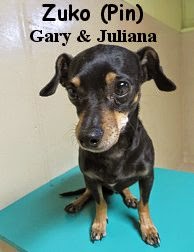 Bright and early this morn, The Fort Fido gang met up with, Zuko, for his assessment. He came in chipper, ready to explore and meet some dogs! As we headed upstairs to the Little Roll, Zuko seemed eager to have a good time. A five year old, ten pound, Miniature Pinscher and Miniature Dachshund Mix, Zuko, is very cute and displays a joyful disposition. After getting his bearings, it was time to meet the pack, and Zuko did so with ease. Meeting and greeting, Zuko entertained himself by scampering about, socializing with the other pack members, and checking out the toys a bit. Although Zuko didn't get into much dyadic (one on one) play, his actions suggested he was having a great time. His body stayed fluid, and his tailed wagged often while staying with us today at The Fort. Zuko is welcome anytime, and we shall be getting to know him more... We will not be surprised at all, if he busts out into some more play soon.

-Grant
P.S. Ah, almost forgot, in the following Little Roll clip, you can spot Zuko buzzing around, among others.