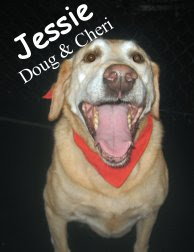 This morning, we welcomed another new pup into the Fort Fido pack. Jessie is a ten and a half year old Yellow Lab, and weighs in at 74 pounds. While she has never attended daycare before, but it's definitely not her first day at the rodeo! She has been to the off-leash dog park, where she learned how to speak good "dog." She didn't bust out the moves today (who would expect that from an old gentlewoman?), but we got a great glimpse of her no-nonsense personality.

Jessie was in good company today--ten-year-old Hank and eleven-year-old Luther were both in attendance as well. There have to be some old-folks to make certain that the youngins are brought up right and learn all their manners! Though the younger crowd tend to do the most rip-roaring-around, daycare is great for dogs of any age. Even pups that don't play very much can benefit from the calming influence of being with the pack. Dogs are social animals! It's good for them to get out and meet new people, just like it is good for us humans.

We'll be seeing Jessie again for a few days next week, when we'll get to know her even better.

Be seeing you again soon!