There weren't too many of the small guys today, so ball time came downstairs and Cooper, a Shih Tzu who has been faithfully attending the Fort every weekday since September of 2006, was given a run for his money by the larger dogs. He's pretty spry for a nine year old dog!

Cooper is kind of the "King of the Hill" here at the Fort. He gets the special privilege of coming out of the play areas. When he first started, Cooper had severe separation anxiety. We're not certain if we could handle another case of his magnitude! But Cooper has worked out quite well with us. He's perfectly at home in any of the play areas, and will sometimes follow us in-- even into the big-dog area! I'm not certain who is more confused about who runs the Fort: Cooper or us.


Abbey and Ruby had the medium side to themselves for a bit this morning, and they decided to make the most of it and have a wild romp. 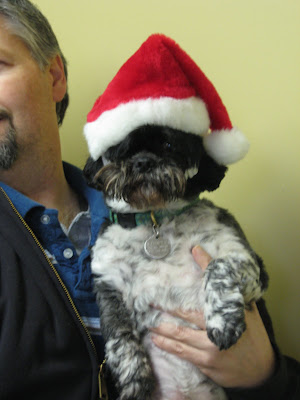 And Happy Holidays from Cooper!
Posted by Fort Fido at 8:47 AM