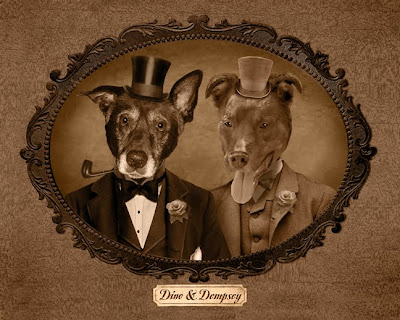 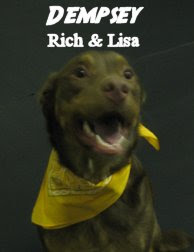 Dempsey has been coming to Fort Fido regularly since the beginning of 2008! He is a very personable, 75 pound, almost five year old, Boxer mix. Dempsey is awesome, he hangouts in the Big Roll and takes on all comers. One of our most calm and balanced, Dempsey is a key player in the Large pack. Every once in awhile he'll get into mischief and the way he sits just has to be seen to believe (sorry, no picture)... He sits on his butt, upright, like a human would hahaha! His owners are super cool, they keep him on a great routine and understand dogs well.

-Grant
P.S. By the way, the guy with the pipe in the picture is Dempsey's brother Dino. He sure looks like a character! Thanks for sending us that photo.
Posted by Fort Fido at 12:48 PM