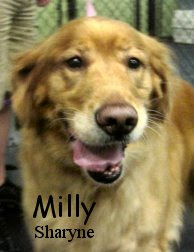 Milly was in bright and early for her assessment this morning. She is a seven year old, eighty-eight pound Golden Retriever that ventured into the Big Roll. Milly is here to learn how to be around other dogs. On Friday, her sister Lilly will be coming in to get a grasp on the same idea. Their owner's goal is to have them be more social with other dogs because all they have ever known is each other. Milly did ok but didn't know what to think of it all. Fortunately, she didn't mind the other dogs trying to get to know her. Nice job Milly.

Lilly and Milly's owner has been working with outstanding trainer, Garrett Stevens of Alpha & Omega Dog Training (253-653-4890). Garrett tells us that they are making good progress. Their owner is also working with Lorian Collins of Pampered Pets Plus (253-278-4168), a local pet sitter that specializes in conscious services for pets and their people. We have gotten a lot of positive feedback on Garrett and Lorian from several Fort Fido customers. If you are interested in any of their services I recommend giving them a call.

-Grant
P.S. Just a reminder, this Tuesday's Basic Obedience and Leadership Class, with Garrett Stevens, is almost full. If you are interested call The Fort (253-460-0299) to get signed up!
Posted by Fort Fido at 12:50 PM